News > £400 energy-support payment for all households in the UK

£400 energy-support payment for all households in the UK 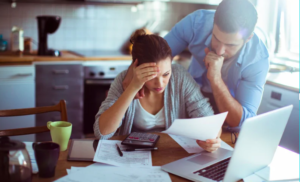 Every household in the country will be given £400 by the government to help pay their energy bills, chancellor Rishi Sunak has announced. Some of the most vulnerable households will be eligible for up to £1,500 in support, in a move set to help families deal with the cost-of-living crisis. It follows the announcement that the energy price cap is likely to rise by £800 in October and inflation is set to be around 9% on average this year.

The new package of support measures, which amounts to £15bn, is being funded, in part, by a one-off "energy-profits levy" on energy companies. The windfall tax of 25% on gas and oil companies' profits will be a temporary measure and balanced by an incentive for those companies to get 90% tax relief on investments.

How much money will I get to help with energy bills?

Earlier in the year, the government announced a £200 energy bill rebate, which was due to be applied to accounts in October. The latest measures mean that this payment will change from being a repayable loan to a grant, meaning it will no longer have to be paid back. What is more, it will be increased to £400 and will be automatically available to all households.

In addition, 8 million low-income families will be given an extra £650, which will be paid directly into their bank accounts. To be eligible, you need to be receiving means-tested benefits. The payments will be made in two lump sums: one in July and the other in the autumn.

For those getting non-means-tested disability benefits, which equates to around 6 million households, there is a further £150 payment on offer. Again, this is in addition to the standard £400 grant for all households.

This means that if you are on a low income and have a disability, you will be eligible for £1,200 in support, comprising of the £400 universal grant, £650 cost-of-living payment for low income families and £150 disability payment. 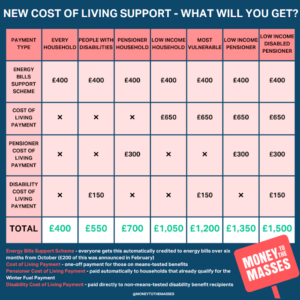 What help will pensioners get with their energy bills?

The Chancellor announced that 8 million pensioner households will get a £300 "pensioner cost-of-living payment", which is paid in addition to the £400 given to all households. For the purposes of these measures, you are defined as being a "pensioner household" if you are in receipt of the Winter Fuel Payment. This means you were born on or before 26 September 1955 and live in the UK for at least one day in the "qualifying week" in September of that financial year.

If you are a pensioner on a low income, you will also get the £650 cost-of-living payment. If you also receive disability benefits, you will get the £150 payment, meaning you will eligible for £1,500 in total.

It is worth noting that there is more help available for low-income pensioner households, with those receiving the Guarantee Credit element of Pension Credit automatically qualifying for £140 off their electricity bill as part of the Warm Home Discount scheme.

By Lauren Burrows
4 min Read 18 Feb 2022
4 million households could be missing out on discounted broadband rates, according to the consumer regulator Ofcom. Currently only 55,000...

By Damien Fahy
1 min Read 02 Oct 2019
The 34th episode of my weekly Youtube show where I discuss what is happening in investment markets and what to...