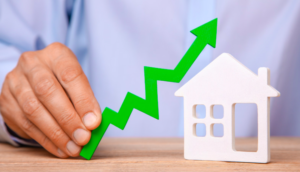 According to official data from the Office for National Statistics, house prices in the UK rose by a further 0.8% in December, bringing the annual increase to 10.8%. The average property ended the year valued at £274,712, having increased by just over £27,000 in 2021.

It continues a sharp upward trend in house prices since June 2020, when the government's measures to support the housing sector during the pandemic, which included waiving Stamp Duty Land Tax on properties up to £500,000, led to greatly increased activity. There is speculation now over whether there is likely to be a house-price correction in 2022.

What does the latest house price data show?

Looking at the regional variations, the strongest annual house price growth was in Wales, which saw a 13% increase. In England, meanwhile, the greatest price rise in 2021 happened in the South West, with an increase of 13.6%. London saw the slowest growth, with a rise of just 5.5%, on average.

Statistics for the year showed that there was an estimated 100,110 transactions on residential properties with a value of £40,000 or greater in December 2021. This was down 20% on December 2020, suggesting that activity in the sector is beginning to slow.

Is now a good time to move house?

The UK House Price Index is the most accurate of the house price indices available for the UK market as it is based on Land Registry information on completed sales. However, there is a lag in when the information is reported, which means the figures for December are the most recent available. Although we have yet to receive confirmation, there is general consensus that we are likely to see a cooling in the housing market in 2022. This is based on a number of key factors:

For regularly updated commentary on what is happening to house prices in the UK and whether now is the time to move, read our article "What is going to happen to UK house prices?". You may also find our analysis of remortgaging in 2022 useful.

What does the latest house price data show?House price change by region in EnglandIs now a good time to move house?

By Laura Mossman
5 min Read 16 Aug 2021
UK house prices fell in August for the first time this year, according to new data from property website Rightmove....

Why can't I sell my house? Advice on why your property isn't selling

By Liam Fahy
10 min Read 28 Sep 2021
In the current UK property market it is important when trying to sell your home, that you give yourself the...

What is going to happen to UK house prices?

By Laura Mossman
11 min Read 03 May 2022
If you are planning to buy or sell a house, you will be interested to know what is likely to...