Inflation falls to 5% – the good news and the bad news 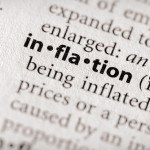 The UK rate of inflation as measured by the Consumer Prices Index (CPI) fell slightly to 5% in October, down from 5.2% the previous month.

Despite this drop, inflation remains well above the Bank of England's target of 2% (for the 23rd month in a row) and also exceeds the Government's 3% upper limit.

This will require the Governor of the Bank of England, Sir Mervyn King, to write a letter to the Chancellor of the Exchequer stating what actions he has taken to tame price increases. A task that is becoming a regular chore for Sir Mervyn King as the control of  inflation continues to be a big challenge.

Falls in the prices of food, driven by heavy supermarket discounting, air transport and fuel have helped to push down the inflation rate.

Increases in the cost of clothing, electricity and gas have created some upward pressure.

The good news - Inflation is expected to keep falling

The Bank of England has said it expects the rate of inflation to drop in 2012 as food and petrol prices fall. In addition, the impact of the Government's increase in VAT, in January this year, will work its way through the inflation calculations.

The upshot is that a lot of analysts agree that inflation is on a steady downward trend, at least in the near term.

The bad news - next year's benefit levels could be hit

Usually the Government uses Septemeber's annual inflation rate as the basis of the annual increase in a swathe of benefits, including the basic state pension. However, it had been mooted that the Chancellor, George Osborne, was considering not increasing benefits in line with inflation next year in order to cut its benefits bill, after inflation in September hit 5.2%.

While the state pension may be safe, given the Government's commitment to increase inflation in line with its 'triple guarantee', cut backs on rises in unemployment benefits, disability allowances and other benefits could be on the cards.

If the Chancellor was already toying with the idea before, then this latest evidence of a possible peaking in UK inflation will certainly provide further food for thought. The Chancellor will confirm the level of the planned benefit increases in his Autumn Statement on 29th November.

By Damien Fahy
1 min Read 13 Feb 2020
The 50th episode of my weekly YouTube show where I discuss what is happening in investment markets and what to...