We've all heard of the term 'Quantitative Easing' but what does it actually mean?

Last week Ben Bernanke, the chairman of the US Federal Reserve, announced that America is going to start printing money again, in fact another $600bn to add to the $1.7trn that was pumped into the economy at the start of 2009. In reality the US central bank doesn't actually print more money but instead increases the level of cash in the economy by what is known as Quantitative Easing (QE). But what is QE? Below I’ve provided a quick guide to all things QE:

As I said above whether it's the Bank of England or the US Federal Reserve QE is when central banks start buying up assets (such as Gilts) in exchange for cash they've created. What this does is flood the economy with new money. However, the central banks don't actually print new bank notes, these days it's all done electronically. So instead they create money from thin air electronically and then use it to purchase assets.

Why are they doing this and what do they hope to achieve?

Historically central banks have changed the bank base rate in order to boost or slow down the economy. However, interest rates are at an historical low, just 0.5% in the UK, so there is no room for cutting them further. So by employing QE the theory is that the money supply in the economy is boosted which will get institutions lending again and consumers spending. The net result is that the economy is hopefully stimulated.

Has it worked so far in the UK?

It's hard to tell whether the £200bn the Bank of England has pumped into the economy to date has made a difference. While the UK economy has exited recession as measured by Gross Domestic Product figures (GDP) it's impossible to say whether this was the result of QE or whether it would have happened anyway. Also banks have used a lot of the QE money to shore up their dodgy balance sheets which has resulted in less money trickling down the food chain in terms of lending, than was originally intended. If anything all it has served to do is inflate asset prices and boost stock markets.

What are the problems with QE?

QE is being administered by the same people who allowed the global economy to get into the current mess. So why should we believe that they know what they are doing now? If we are unsure as to whether the first bout of QE was effective is it sensible to blindly peruse the same course of action?

The other concern is inflation. In simple terms if the amount of money in the economy increases then its purchasing power decreases. This is called inflation. But inflation is notoriously difficult to control once it gets a grip in the economy. Some inflation is good for the economy as it stimulates consumer spending but if QE is overdone then there is a danger of opening the Pandora’s box of hyperinflation. This is when the increase in the price of goods soars out of control and people start running around with wheelbarrows of money as their currency becomes worth less and less.

While the later scenario is a bit doomsday don't be fooled, the UK government want a certain amount of inflation. Think about it for a second, if the real value of the money in your pocket diminishes in an inflationary environment then so does the real value of debt. Put it another way, if you'd taken out a loan for £5,000 in the 1960's that would have been a lot of money back then. Let's say you didn't bother paying off the debt in the interim period to today and instead simply paid the interest owed on the loan. The value of your debt in real terms today would be much smaller by comparison. Today £6,000 doesn't buy you anywhere as much as it did in the 60's. Your debt would have been inflated away. And given the size of the UK's and other countries national debt levels inflating away debt wouldn’t be a bad tactic for governments to employ would it.

Is the UK likely to start more QE?

Maybe. The Monetary Policy Committee (MPC) of the Bank of England meet each month to set the base rate as well as to discuss their QE plans. Now while most people on the committee have voted to maintain both the interest rate and QE at their current levels there have been calls to restart QE from one of its members in particular. Whether the MPC do or don't vote for more QE will depend on how the economy fares in the coming months. If a double-dip recession looks likely then you might just hear the printing presses cranking up on this side of the Atlantic as well.

Is more Quantitative Easing about to boost the stock market? - Episode 35 of Damien's Midweek Markets

By Damien Fahy
1 min Read 09 Oct 2019
The 35th episode of my weekly Youtube show where I discuss what is happening in investment markets and what to... 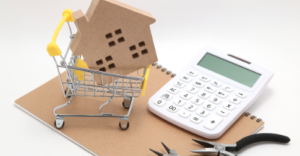 By Marc Shoffman
17 min Read 14 Jun 2021
Imagine you find your dream home but are unable to sell your current property. What if there was a way...

This website uses cookies to improve your experience while you navigate through the website. Out of these, the cookies that are categorized as necessary are stored on your browser as they are essential for the working of basic functionalities of the website. We also use third-party cookies that help us analyze and understand how you use this website. These cookies will be stored in your browser only with your consent. You also have the option to opt-out of these cookies. But opting out of some of these cookies may affect your browsing experience.
Necessary Always Enabled

Any cookies that may not be particularly necessary for the website to function and is used specifically to collect user personal data via analytics, ads, other embedded contents are termed as non-necessary cookies. It is mandatory to procure user consent prior to running these cookies on your website.