News > Student loan repayments in England and Wales to be capped at 7.3%

Student loan repayments in England and Wales to be capped at 7.3% 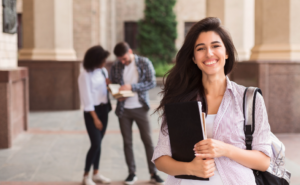 The interest rate on student loans in England and Wales is increasing from 4.5% to a maximum of 7.3% from September. Although a significant rise, it is a reduction on the anticipated rise, which would have been 12% based on the inflation rate.

This means a potential saving of £180 per month on the accumulated interest for a student loan balance of £45,000, according to the Department of Education. However, monthly repayments will remain unchanged, with students instead paying less overall over the lifetime of the loan.

The government announcement on the change to the interest rate on student loans follows the publication earlier in the year on an overhaul to the way higher education is funded, which is set to be introduced for those starting in September 2023.

How is the student loan rate calculated?

The student loan interest rate is generally announced in August for the next academic year and is based on the Retail Price Index from the previous March. The total amount you pay depends on whether you are still studying or, after the April following graduation, how much you are earning.

Based on the RPI figure from March 2022, which was 9%, the student loan should have been capped at 12%. However, the Department for Education has opted to cap it at 7.3% and announce it earlier than usual "to provide greater clarity and peace of mind for graduates at this time".

How much will you have to repay?

As the repayment on your student loan is based on your income, your monthly payment won't change as a result of the new price cap. However, the total value of the loan will reduce, which means you are likely to pay off less over the lifetime of the loan. It's worth noting that, as the debt is currently cancelled after 30 years, if you are on a lower income you are unlikely to benefit fully from the reduction in the rate.

For students starting higher education in September 2023, the system is changing. The repayment term will be 40 years instead of 30 years, after which point the debt will be written off. In addition, the income threshold is being reduced to £25,000 until the academic year 2025/26, but the interest payable will track RPI, meaning students will not pay back more than they borrowed in real terms.

For more information on student finance, read our article "Student debt: What you need to know about repaying your student loans".

How is the student loan rate calculated?How much will you have to repay?

Student loan repayments set to change: What you need to know

By Laura Mossman
2 min Read 16 Aug 2021
The Department of Education (DoE) has announced its annual update to the interest rates and repayment threshold for UK tuition...

By Andy Leeks
3 min Read 02 Apr 2020
The Financial Conduct Authority (FCA) has made a number of emergency proposals in order to assist those that are suffering...

Student debt: What you need to know about repaying your student loans

By Laura Mossman
10 min Read 30 May 2022
Student debt and sky-high tuition fees are often seen as one of the younger generation's biggest financial obstacles. With 2...