The hidden cost of shopping online 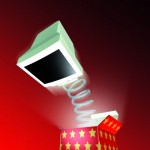 As you search for the best price for Aunty's Take That CD more often than not   online retailers will beat the high street prices hands down. It's not surprising then that over £12.4 billion is likely to be spent online this Christmas, according to research from IMRG, the UK trade association for online retailers.

You may think that the reason why online retailers consistently beat the high street for price is simply down to them taking advantage of economies of scale - but you'd be wrong.

But, if you've ever wondered why the CD, DVD or printer cartridge you buy online often arrives with a Guernsey post mark on it then you may have stumbled across the answer.

The VAT loophole and flowers

The "playing field" for UK retailers and online vendors is not exactly level. To understand why we need to go back to 1973 when Britain began levying Value Added Tax (VAT). Guernsey - a "crown dependency" but independent from the UK remained outside the EU and was allowed to pre-pay VAT because they exported mainly perishable goods (flowers & cream) and need to avoid custom delays.

In 1983 these arrangements were superseded by a directive that established low value consignment relief (LVCR). This allowed member states to avoid collecting VAT on low value items where administrative costs were deemed excessive. Britain set the bar at £18 and therefore all goods below this price imported from outside the EU did not attract VAT.

As a result every major music retailer (including the likes  Tesco, Asda, Amazon, HMV, Play.com, and now Sainsbury's)  now sell CDs and DVDs online using offshore centres because of this loophole and with online DVDs sales accounting for 34% of the total market it is obviously very lucrative.

The British retailers being forced out of business

However, the exploitation of this VAT loophole has its downsides. Firstly, the government is missing out on a potential chunk of VAT which, given the current UK budget deficit and the associated cutbacks, seems ludicrous. Yes, the government could close the loophole should they wish to but the knock on affect to the likes of Royal Mail, who deliver the online goods, could be disastrous.

But perhaps the biggest cost is that while you as a consumer may benefit from online retailer exploiting the VAT loophole, giving you access to cheaper goods, it damages their smaller competitors on the mainland. It's no wonder then that independent music shops are closing at an alarming rate (600 in the last 5 years). And with VAT set to increase to 20% in January the situation will only get worse. So the next time you shop online spare a thought for the little guy.

By Laura Mossman
1 min Read 02 Dec 2022
In this article, we review the M&S Shopping Plus Offer credit card, which offers 20 months interest-free on balance transfers...

By Laura Mossman
3 min Read 29 Nov 2022
When you are shopping abroad, you are likely to be charged a foreign-transaction fee when using your credit card. This...