The UK economy faces a choppy recovery and inflation, says Bank of England

The UK economy faces a "choppy recovery" over the next two years, the governor of the Bank of England, Mervyn King, warned during today’s Quarterly Inflation Report.

His comments came in response to the Bank of England lowering its economic growth forecast and admitting that inflation would stay higher for longer than previously thought.

However, King claimed that inflation is still expected to fall back below the Bank’s 2% target within two years without the need to raise interest rates. This will in part be due to January 2011’s VAT increase having dropped out of the inflation calculations by then.

The Bank also expects the economy to grow by less than 3% in 2011, down from their forecast in May of nearer 3.6%. The reduced forecast is a result of tightening fiscal policy, weaker consumer and business sentiment as well as a lack of bank lending. The bank’s range of GDP forecasts are summed up in the graph below 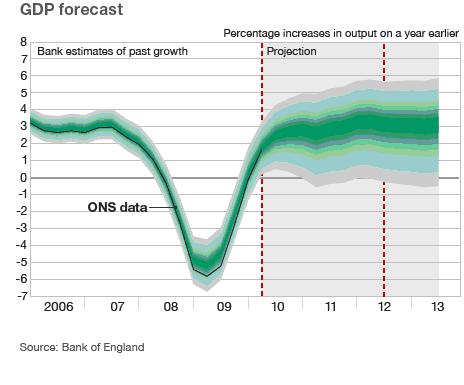 King went on to add that ‘’It will take many years before bank balance sheets and fiscal positions return to anything like normal,"

"In the meantime they will act as headwinds to the recovery."

"Looking ahead, the UK economy is facing a major rebalancing away from private and public consumption and toward net exports. Achieving that rebalancing, while confronting these headwinds, is likely to mean a choppy recovery,"

Among the factors credited with helping to boost the economy were the continuing economic stimulus measures as well as the fall in value of the pound.

However, Mr King said it would be "several years" before the economy adjusts "back to anything we can call remotely normal", so leaving the door open for further stimulus.

But again Mervyn King’s comments will receive a mixed reception from borrowers while savers are left angry. The prospect of an extended period of high inflation and low interest rates will mean that the real value (i.e. the purchasing power) of savers’ money on deposit will diminish. Meanwhile anyone with outstanding debt will see the real value of what they owe fall while at the same time their interest payments remain curbed in the short term. But if lending conditions dry up and lenders pass increased costs onto borrowers then in the long term even borrowers may lose out.

King’s comments were delivered at the same time as the UK‘s official unemployment figures were announced showing that the number of jobless had fallen by 49,000 to 2.46million, the biggest drop in three years.

However, before people get the party poppers out the Chartered Institute and Development (CIPD) announced on Monday that their research showed a third of employers expect to make job cuts in the next 3 months. They went on to say that the employment recovery will stall as the public sector head count falls amid government cost cutting measures.

So what does it all mean?

I think the best way of viewing it is to picture the economy as if the whole of the UK is sat on an airline flight with Mervyn King flying the plane. The fasten seat belt sign has just pinged on followed by Captain King announcing over the tannoy…

‘’ Ladies and Gentlemen the fasten seat belt sign has been illuminated as we’re approaching a weather system and I expect that we might hit a bit of turbulence. Please return to your seats and fasten your seatbelts.’’

As a result most of the economy passengers think ‘‘oh bugger’’ while the guys in business class just turn over in their beds and fall back to sleep – or simply moan at the air hostess because they can’t get any more champagne until the plane is through the worst of the weather.

Either way there’s sod all the passengers can do about what’s coming up as they’re not flying the plane and they can’t very well decide to get off at 35,000 feet. Fingers crossed they avoid the storm anyway.

Besides, it’s not the turbulence you want to worry about it’s the landing.

Bank of England raises interest rates to 0.5%: What does it mean for you?

Bank of England warns of bitcoin risks: Everything you need to know

By Damien Fahy
3 min Read 17 Nov 2021
As bitcoin and the cryptocurrency sector continue to grow, the Bank of England’s Deputy Governor has warned that they could...