Saving For Your Future > Investing > Should you buy China funds now?

Should you buy China funds now?

Should you buy into the Chinese equity rally?

Secondly, in order to illustrate how severe the rally in Chinese equities has been. The size of the rally actually distorts the vertical scale on the chart. So much so that the incredible 15% return from the S&P 500 in the last 6 weeks of 2014 is barely noticeable!

What is driving the rally in Chinese equities?

The chart below shows the performance of the MSCI China Index over the last 3 years. You can clearly see that at the end of 2014 the Chinese stock market rally gathered momentum. So what was the trigger? 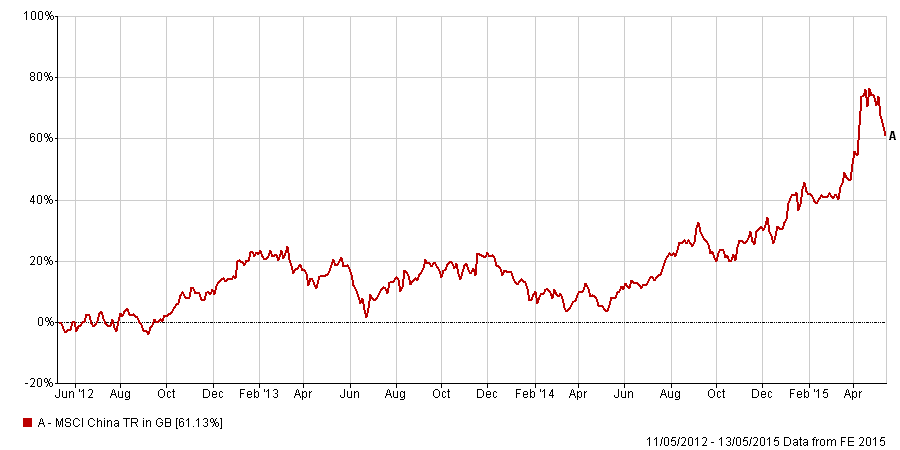 A shares and H shares explained

Back in November Chinese authorities launched the Shanghai-Hong Kong Stock Connect, a pilot scheme to allow very limited trading between both exchanges, effectively opening up the Chinese domestic stock market to the world’s investors and vice versa.

Despite the long wait for such a tie-up (it had been set back and cancelled numerous times over the previous 7 years) investor demand didn’t live up to the pre-launch hype. Part of the reason was that only wealthy domestic Chinese retail investors (when I say ‘retail’ that means ordinary investors not companies) could take advantage of it. Yet they had already been trading in overseas shares via other creative methods. So there was little appetite for the new scheme. The long and short of all this is that flows of investment money in and out of China had been effectively frozen but things begun to thaw at the end of 2014.

Then in April 2015 the Chinese regulators extended the tie-up so China’s professional fund managers could now start buying H-shares which also paved the way for international investors and hedge funds to get stuck into A-shares. So in a sense the flood gates were propped slightly ajar.

Chinese investors buy into the rally

But there is another wall of demand that is fuelling the current rally, On the back of a soaring domestic Chinese stock market (A-shares) Chinese investors began rushing to buy into the rally. In the first week of April alone 1.67 million new trading accounts were opened and the trend is continuing.

China equities are actually cheap by historical standards – and buying cheap can lead to profits further down the line.

One measure of a company’s value is the simple P/E ratio (price to earnings). As a very loose rule of thumb anything around 10 is pretty good. So it’s shocking to see that over a third of the stocks on the Shanghai exchange have a P/E ratio of over 50! That means their price is completely disengaged from the actual earnings the company is expected to make over the coming year. Or in other words reality has well and truly left the building! In the tech sector there are valuation levels not seen since the US dotcom bubble. On top of that 1 in 17 shares have at least doubled in value in this year alone according to the FT.

It is these sorts of figures that are driving the frenzy among Chinese retail investors with the initial spark that ignited the rally being the property downturn in China.

Yet the improved tie-up between the Shanghai stock exchange and Hong Kong’s exchange has meant there has been a rotation from the overheated higher valued A-shares into cheaper H-shares, so driving up the Hong-Kong market. Remember, previously Chinese investors could only buy in China (A-shares) so values soared versus H-shares. So why hold A-shares in a company when you can buy the cheaper H-share version? Just look at the chart below to get a sense of how A shares (the red line) have become overheated versus H shares (the blue line) over the last year. 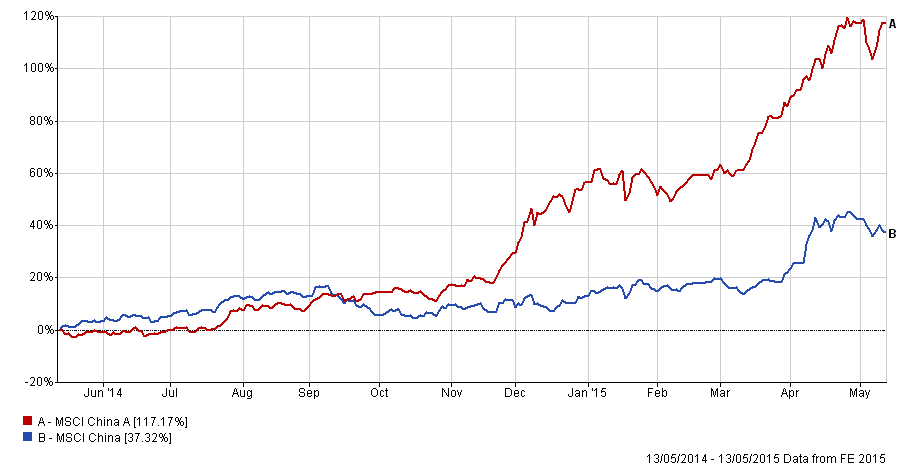 Subscribers to our DIY investment service, 80-20 Investor, will have read in the weekly newsletters that Chinese economic growth is one of the BIG worries for global markets. China’s economy grew at its lowest rate in 6 years, during the first 3 months of this year. While the actual rate is 7% it needs to be taken with a pinch of salt given the secrecy of Chinese economic data and the fact that it is bang on the Government’s stated target. The point is that China’s economy is slowing and ahead lies a difficult transition period.

China needs to do something to prop up its economic growth and that inevitably means some form of monetary policy loosening (i.e. interest rate reductions and the like). Yet investors have learned from the US and Europe that easy money means higher share prices. So the market has rallied even more as a result.

China has already taken steps along this path by cutting interest rates again last week. Previously they also loosened the restrictions on bank lending. But there was a fly in the ointment. China has tightened the rules which allow investors to borrow money and invest it (called ‘margin lending’) and rumours abound over further measures in the pipeline. This prompted the market to sell off and trigger 80-20 Investor stop loss alerts in recent weeks on 2 funds within the 80-20 Best of the Best selection.

So should you buy Chinese equities now?

Unlike most investment experts I actually invest £50,000 of my own money live for 80-20 Investor subscribers to see. In just the first 10 days of running the portfolio I made  back the cost of an 80-20 Investor subscription. At the start of April I sold out of US technology stocks (because I thought they were expensive) and bought Chinese equities. Interestingly the point at which I bought into China was right at the bottom of the latest spike on 7th April 2015 (see chart below showing the fund's performance over the past 3 months ) and the fund made 14% in a week before selling off slightly. While it only makes up 7% of my portfolio it contributed to the portfolio making 4.8% (net of charges) in just 6 weeks.

Let’s make no bones about it, Chinese equities are in a bubble and remember bubbles pop. Right now the mainland China stock market bubble is inflating another bubble on the Hong Kong stock exchange.

Yet what the current rally does emphasise is the untapped wealth in China. To put the 1.67 million new trading accounts opened by Chinese investors in a single week into context that number only equates to a 1% increase in accounts per week due to sheer size of China.

On top of that, according to Forbes, Chinese households still have between 60-70% of their assets in cash compared to 40% for Korea and Taiwan.

While valuation methods are debatable and mask a multitude of sins the fact remains that Chinese equities on the Hong Kong exchange remain cheap by historical standards.

There is also the conundrum of the Chinese Government’s attempts to cool its stock market. While it clamped down on margin lending, just a week previously it had increased the number of trading accounts retail investor are allowed to 20… up from the previous limit of 1?! That doesn’t sound like a Government trying too hard to burst an equity bubble. Plus regulators limit short selling of Chinese shares, i.e. making bets that the market will crash.

What is likely to dictate the top performing fund managers in 2015 is how they play China. Sit on the sidelines and you could be left behind, over commit and you risk getting caught when the bubble bursts.

There remain huge risks with investing in China and we will never get the exit right. So how am I going to play it with my £50,000 portfolio?

That is why I’m entrusting my allocation to the 80-20 Investor algorithm which has been backing China since the end of 2014, well before the current rally. When it comes to market timing you need a process as you won’t get it right. The 80-20 stop losses can help avert disaster.

The journey will be bumpy yet Morgan Stanley believe the Hong Kong’s Hang Seng Index could hit 30,000 by the end of the year. Which means there’s another 8% upside in their view.

But to put that into context they said the same thing at the start of 2008 (look at the peak in the chart above) predicting a 22% rise. In fact by the end of that year it had fallen 48.27%!

Which funds to buy?

If you decide to invest in China then you should do so with your eyes wide open, knowing that you could be sitting on a heavy loss as easily as a big profit. The 80-20 Investor algorithm can help identify the best funds while the 80-20 Investor stop loss alerts can warn of a reversal in fortunes. Sign up to 80-20 investor to find out more.

Find out how to be a successful DIY investor

If would like to learn how to choose which funds to buy and when, even if you are a complete novice, then read my FREE short series of emails which teaches you how. It takes just a couple of minutes a day and is the result of thousands of hours of research and a career in analysing investment funds. You will learn the simple techniques and tools that the very best fund managers use which you can too.

By Damien Fahy
9 min Read 04 Sep 2019
The 30th episode of my weekly Youtube show where I discuss what is happening in investment markets and what to...

By Damien Fahy
1 min Read 16 Oct 2019
The 36th episode of my weekly Youtube show where I discuss what is happening in investment markets and what to...

By Damien Fahy
4 min Read 28 Aug 2019
The 29th episode of my weekly Youtube show where I discuss what is happening in investment markets and what to...