News > Bitcoin price plummets to lowest level in 3 months: What next?

Bitcoin price plummets to lowest level in 3 months: What next? 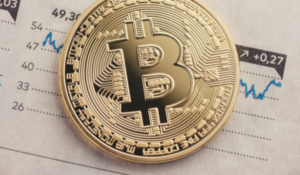 The price of bitcoin fell to its lowest level in 3 months during Wednesday trading, sinking to just over £24,000, amid concerns about the viability of cryptocurrency as a legitimate financial entity.

For investors whose portfolios are exposed to bitcoin, the dramatic downturn may have come as a sore - but not entirely unexpected - surprise.

Why did bitcoin prices fall?

Bitcoin had been having a bad week already. Last Friday, tech entrepreneur and cryptocurrency advocate Elon Musk announced that his company, Tesla, would no longer accept bitcoin for purchases of electric cars due to concerns about the environmental impact involved in cryptocurrency mining.

The technocrat's statement, broadcast in typical Musk style via Twitter, sent bitcoin plummeting ahead of the weekend. Bitcoin had been sitting at record highs of around £45,000 in April, but Tesla's u-turn on the matter caused it to free-fall to nearly £35,400, sending shares spiralling as investors came to terms with bitcoin's biggest backer appearing to get cold feet.

It did not stop there, however, as Chinese authorities warned banks and payment firms against providing services related to cryptocurrency transactions, saying that bitcoin's trademark volatility "seriously violates people's asset safety" and is disrupting the "normal economic and financial order".

Already bruised from Musk's statement, bitcoin fell even further - briefly scraping down to just £22,602 at 2pm on Wednesday - while rival cryptocurrencies Ether and Dogecoin also saw their prices tumble.

Bitcoin has managed to regain some ground since then, climbing to £28,827 during Thursday's morning trade, and appears to have settled around the £28k mark for most of the day. However, it is still a long way off those lofty highs of £45,000 just last month.

The chart below shows the volatility of bitcoin's price this spring: 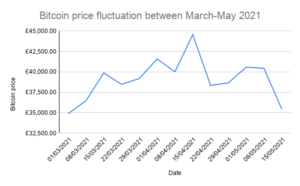 In recent weeks, cryptocurrencies have attracted criticism of their fossil fuel consumption and have also been compared to a "Ponzi scheme". The latest fall in bitcoin's value could well be an apt reflection of a waning appetite for its controversial, unpredictable nature. However, while banks and traditional investors warn consumers to stay away, cryptocurrencies have broken into the mainstream.

Some analysts maintain that, despite bitcoin's recent losses, it is still on track to reach new all-time highs throughout the course of the year. Similar price dips were witnessed during 2013 and 2017, and bitcoin has only gone from strength to strength since then.

“At this rate of fall, bitcoin is likely to see support at $40,000 [£28,312] if the selling continues, and surviving this fundamental onslaught can set a new run that will create a new all-time high of $70,000 [£49,546] in the mid-to-long term,” Alexander Vasiliev, co-founder of global payment network Mercuryo, told The Independent.

“Once the dust settles and the emotions subside, we’ll all remember that Tesla is still holding onto its pile of bitcoin,” added Antoni Trenchev, managing partner of digital asset manager Nexo. “Call it consolidation or accumulation, bitcoin is getting comfortable and readying itself for the next move up towards the next key figure of $75,000 [£53,085].”

However, the future is all but certain, and top analysts are still warning investors to prepare for hefty losses.

Kevin Brown, a savings and investment specialist at Scottish Friendly, reminds us that investing in bitcoin - or any cryptocurrency - is “pure speculation” and a “zero-sum game” for those that do not fully understand the risks that come with the crypto market.

“The level of volatility means that savers who choose to invest in cryptocurrencies must be prepared to lose all their money,” he warned. “At least when you are at the bookies you have a real chance of understanding the outcome and probabilities if you know the horses or football".

As always, it is wise for investors to limit their bitcoin exposure to a very small proportion of their overall portfolio, if at all, and accept that they could lose all of their money invested in the cryptocurrency. For guidance on building a diversified portfolio, read our guide on "How to invest £10k and get the best return".

What is level term life insurance?

By Harvey Kambo
21 min Read 16 Jun 2021
Level term life insurance is one of the simplest types of life insurance policy you can buy. In this article...

By Damien Fahy
1 min Read 27 May 2020
The 63rd episode of my weekly YouTube show where I discuss what is happening in investment markets and what to...

Cryptocurrency: What is bitcoin, how does it work, and is it safe?

By Bronte Carvalho
16 min Read 11 Jan 2022
Bitcoin, the completely virtual “cryptocurrency”, has taken the world by storm in the last few years. It’s essentially a type...