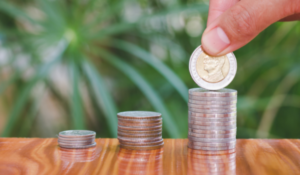 UK inflation reached 3.2% in the year to August, marking the largest increase since records began in 1997, according to figures from the Office for National Statistics (ONS). The move was driven primarily by the rising cost of food and travel compared to levels this time last year.

What is happening with inflation - will interest rates rise?

The consumer prices index (CPI) measure of UK inflation for August was also the highest since March 2012. Now at 3.2%, UK inflation stands well beyond the Bank of England’s (BoE) target of 2%, a threshold designed to reflect steady prices across the country. The rise has mostly been driven by food and travel costs, which have increased significantly compared to this time last year.

The graph below showcases how inflation rates have changed over recent years. 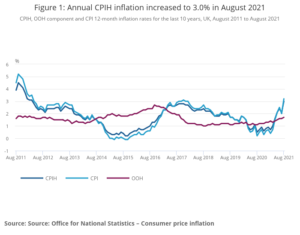 In August 2020, the Eat Out to Help Out scheme was in full-swing, giving diners 50% off on meals up to £10 on Mondays, Tuesdays and Wednesdays. The hospitality and tourism industries also saw a state-sanctioned VAT discount to help them recover from the initial springtime lockdown.

This year, rising food prices have pushed inflation up too, with the ONS referring to "anecdotal reports that shortages of supply chain staff and increased shipping costs, coupled with demand increases following the lifting of national lockdowns". Meanwhile, the ongoing global shortage of semiconductor chips has continued to stifle the car manufacturing sector, forcing secondhand car prices up 18.4% over the past four months alone.

Transport costs have also increased this summer. Average petrol prices stood at 134.6p per litre in August, compared to 113.1p this time last year when lockdown restrictions were still choke-holding the travel industry.

Speculation has mounted in recent months that the BoE may be forced to intervene and raise interest rates to quell inflation earlier than planned - in 2023 - but the institution has warned not to read too much into the newest figures, stressing that they are likely only “temporary”.

Nevertheless, analysts still widely expect UK inflation to hit 4% by the end of the year. A recent survey conducted by Retail Economics found that more than half of consumers are concerned about rising costs. The market research company said that worries about the cost of living have reached their highest point in more than 5 years.

You can read more about Damien’s interest rate predictions, and his advice for those with mortgages.

What does it mean for you?

The impact that high inflation can have on you depends on your financial circumstances. We take a look at how the current inflation figures could affect savers, homeowners, pensioners, commuters, and the cost of living.

Rising inflation is generally a bad news for savers, as any money you put away will actually be worth less when you withdraw it during high inflation than when you initially banked it. Savings rates across the board are still rather disappointing, and there are no savings accounts on the market that offer interest equal to or higher than current inflation. You can browse the best savings accounts in our weekly updated best buy tables.

Savers with cash ISAs and the like will simply have to wait it out for the BoE to eventually raise interest rates, but those with stocks & shares or investment accounts may find that incorporating higher-risk assets into their portfolios could help them beat inflation - though this method is equally vulnerable to losing money as gaining it. You can read more about the best stocks & shares ISAs here and the best investment platform here.

Those with mortgages will be paying close attention to inflation figures - and any subsequent interest rate decisions - as those on a variable rate could see their monthly repayments begin to rise sooner than anticipated. Homeowners already on a fixed rate mortgage will not see any changes, but those looking to get one ought to make the most of the historically low rates.

Currently, new mortgage rates are at their lowest on record, with lenders competing to offer the best deals on 2 and 5-year fixed terms. Many mortgage borrowers will be looking to fix their rate for a longer period before the BoE raises interest. We rounded up the best 2-year and 5-year mortgage deals in our article “Battle for best rates continues as lenders launch new sub-0.90% mortgages”.

Last week, the UK government suspended the state pension “triple lock” scheme, which would have seen pensions rise in line with the average earnings increase between May and July - a whopping 8%. Widespread staff shortages drove average income up across the country, but the government cautioned that increasing pensions as much as 8% in a single year would simply be “unaffordable”, and instead stated that the rise would be calculated in line with the greater of either inflation or 2.5%.

As it stands, with inflation already at 3.2% and predicted to hit 4% by November, pensioners could still see their pots increase significantly this year - just not by the 8% that many had been hoping for. You can read more about the changes to the “triple lock” pension scheme, and by how much weekly and monthly payments are set to increase, in our article “Pension triple lock suspended: What you need to know”.

The cost of goods and services is rising up and down the UK, but the ONS has broken down which sectors are driving inflation the most in the graph below. 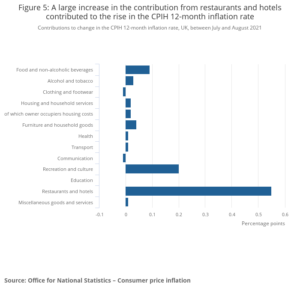 The largest contribution to the rise in inflation came from restaurants and hotels, which increased by 0.55% between August and July 2021. The ONS explains that this effect is largely down to the price falls a year ago in August 2020, as a result of Eat Out to Help Out and similar schemes, and boosted with only a modest rise in prices in 2021.

Other sectors, such as recreation and culture, and food and non-alcoholic beverages, have increased significantly in recent months as the cost of games and toys rises and the UK battles ongoing supply chain disruption which is expected to drive prices even higher as the busy Christmas period approaches. Clothing and footwear prices, on the other hand, saw a modest decrease over the summer as seasonal sales and offers drove receipts down.

Overall, prices are going up, and - particularly when taking into account increasing food bills - the cost of living is rising. This means that weekly shopping receipts are on average more expensive now than they were even just a few months ago, but without wage increases to mirror this change, these day-to-day expenses are beginning to take up more of people's income than before. Brits up and down the country could start to feel the financial squeeze, if they haven't already.

For advice on how to offset these rising prices, check out our top 25 money-saving tips that could save you thousands.

What is happening with inflation - will interest rates rise?What does it mean for you?SavingsMortgagesPensionsPrices

By Andy Leeks
1 min Read 01 Dec 2022
UK house prices have experienced the biggest monthly fall in over 2 years according to house price data from Nationwide....

By Damien Fahy
5 min Read 25 Mar 2022
I was recently asked by a national newspaper for equity fund suggestions that may benefit from rising inflation. In March...

By Laura Mossman
1 min Read 12 Apr 2022
A range of benefits, including Universal Credit, Child Benefit, Pension Credit and the state pension have gone up by 3.1%...