Owning A Home > Interest Rate Forecasts > Inflation to hit 5% says Bank of England, and what this means for interest rates

Inflation to hit 5% says Bank of England, and what this means for interest rates 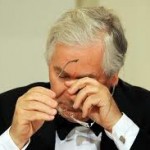 January's inflation figures were announced yesterday and it comes as no surprise that things are getting more expensive. Inflation as measured by the Consumer Price Index (CPI), the government’s official measure of inflation, now sits at 4%. This was an increase of 0.3% up from December's inflation figure. Meanwhile inflation as measured by the Retail Price Index (RPI) which includes mortgage interest payments is now up to 5.1%

The only silver lining to this dark cloud is that the increase was in line with market expectations. But this didn't stop today's newspaper headlines from shouting about an imminent rise in interest rates and a corresponding increase in your monthly mortgage repayments. (Raising interests rates is seen as a way to help reduce inflation).

However, I purposely waited until Mervyn King, the governor of the Bank of England, delivered his subsequent inflation report today before jumping to conclusions. This is because Mervyn heads up the committee which decides interest rates and it’s his job to keep a lid on inflation. So today's inflation report should give a real insight into not only where he sees the economy heading but also what might happen to interest rates in the future.

So why is inflation going up?

Quite simply there are a number of factors such as rising food and oil prices along with last month’s VAT increase causing the price of goods and services to rocket. But most of these factors, with the exception of VAT, are temporary and out of the government's control. So there is an argument that inflation might well drop back to reasonable levels (2%) in the future of its own accord.

So what did Mervyn have to say for himself?

Well Mervyn yet again moved the goal posts as to when he reckons inflation will be back down to below 2%, which is the government's target for inflation. He's said that things will get tougher before they get better and we can expect to see inflation as high as 5% in the near future. However, fear not Mervyn thinks things will be back under control next year.

But given that in May 2010 he made a similar prediction that inflation would be just 1% now, you can see why I might be a little sceptical. The current levels of inflation mean that people are seeing a cut in the real value of their wages. By this I mean that their take-home pay no longer goes as far as it did a year ago. Add to this an uncertain outlook for the economy as well as today's announcement that unemployment has risen again and you can see that it's still' batten down the hatches' time when it come to personal finances. For more help on this read my article - 10 ways to make you and your finances recession proof.

So when did he say interest rates will rise?

Well Mervyn was as elusive as ever on this topic but that hasn't stopped people trying to read between the lines of today's press conference. So depending on who you listen to rates will be going up in May or alternatively some time towards the end of the year. To be honest not a lot has changed as a result of this latest inflation report. The increase in inflation was largely anticipated and Mervyn didn't tell us anything we didn't know so people are still second guessing when their mortgage payments will be going up.

But to cut through all the newspaper scaremongering you can find out more about when interest rates might go up by reading my article Latest interest rate predictions – February 2011.

You might also want to read the recent Reader’s Question: Should I fix my mortgage now?

News, Saving For Your Future

By Bronte Carvalho
3 min Read 03 Aug 2021
We take a look at why savings rates are on the up and where you can go to find the...