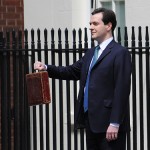 This year's Budget speech will be made on March 21st and already speculation is mounting over what will be announced and how it will affect our finances.

So below I've compiled a list of the latest predictions of what George Osborne may announce in his next Budget. These predictions will be updated daily right up until the Budget on 21st March, as and when more information is leaked or speculated upon. So make sure you check back regularly. I will will also announce any changes via Twitter, so follow me @money2themasses.

On Budget Day itself I will provide LIVE updates via Twitter and, of course, after the event I will provide full analysis of how the Budget will affect you.

(most recent update is in red)

- There are calls to make the current temporary 50% higher rate of tax permanent. More recent rumours are that actually the 50% rate will be reduced to 40%, see this article - George Osborne poised to slash top tax rate from 50% to 40% . Latest speculation is that it may either be cut to 45% from April 2013 or scrapped altogether.

- There is also a call by the Department for Business, Inovation and Skills to scrap the 50% rate altogether. The claim is that the 50% rate actually reduces tax collected due to tax avoidance measures and stifles growth. George Osborne, however, has stated that 50% rate will remain and that he will focus his attention on wealthy homeowners (see 'Property' below).

- No changes to inheritance tax or VAT

- The Chancellor is likely to target people who avoid paying stamp duty when purchasing a home. Estimates are that more than a quarter of expensive houses are bought “off-market”, many using specially formed offshore companies which allow them to escape the duty – paid at 5 per cent on homes worth more than £1m.

- Taxation of the current pension tax free lump sum. It seems that before every Budget speculation is rife that the tax free lump sum will be attacked but it has yet to materialise. Yet there has been strong speculation on the likelihood from several corners, including PwC. But there is the question of ‘how would any tax on pension commencement lump sums be implemented in reality?’ The Chancellor could try and only apply any changes to new pension money but then this would be a logistical nightmare as pension benefits would have to be split into two parts in order to apply any tax charge. Perhaps it would be simpler to just abolish tax free cash altogether if he were to attack tax free cash lump sums but the uproar would be enormous and undermine the new pension auto-enrolment plans. Some analysts also claim that the amount of extra tax revenue gained from doing this is unlikely to warrant such changes. Read this article (Pension tax relief) to understand how much the Government could save.

- Analysis from Standard Life shows that of the three options above - cutting tax relief on all contributions to 20%, reducing the annual allowance or capping the amount of tax free cash - none would raise enough money on their own to pay for increasing the personal tax allowance to £10,000. Their view is that “There are no easy options . By reducing tax relief, you are sacrificing the future to try to stimulate the economy in the short term. Any Government cutting tax relief now should make a firm pledge to restore it at a future date, given the degree of under-saving.”

Legal & General pensions strategy director Adrian Boulding believes the Government is unlikely to target tax-free cash because it will not deliver short-term savings.

Shadow Chancellor Ed Balls last week called on the coalition to use the Budget to cut the tax relief on the highest-earners from 50% to 26%.

- Rate of fuel duty may remain frozen beyond August

- There is call for a rethink on the proposed cut to child benefit for richer families. This article in the Daily Telegraph gives a good insight into the issues.

- There are indications that the Chancellor is looking at watering down the original proposed cut to child benefit for high earners. One idea is to move the threshold from the current £42,745 up  to £50,000. Another possibility is to withdraw benefit from high earners once the child reaches the age of 5, with a further idea of taking away half the benefit where the family only have one high earner. The details of new measures are likely to be available after Budget day. See - Child benefit cap for high earners to be watered down

- Tory MPs are calling for further cuts in spending as well as reductions in income and business tax amid fears that the Government are not doing enough to stimulate the economy.

Could announce  support for green projects together with an update on the Green Investment Bank, either an announcement of first projects commencing or a timeline for their commencement.

It's an outside chance but their may be an announcement of a 25% VAT rate on luxury items, but no details on what is deemed a luxury.

Osborne has already cut corporation tax to 25% from 28%, but will set a target of 20% and announce timescales.

By Damien Fahy
19 min Read 22 Jun 2022
This article is continually updated to bring you the latest analysis on when interest rates are likely to rise or...

By Laura Mossman
5 min Read 03 Mar 2021
When Chancellor Rishi Sunak stood at the despatch box to deliver the Budget for 2021 it was clear there would...

By Damien Fahy
6 min Read 27 Oct 2021
The UK’s Autumn Budget, unveiled by the Chancellor of the Exchequer, outlined the government’s tax and spending plans for the...