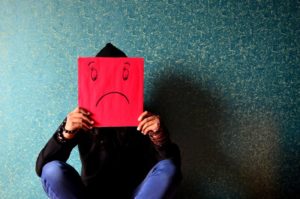 According to moneyandmentalhealth.org, 93% of people they surveyed spend more when their mental health is suffering. A worrying statistic in a world of easy credit and rising problem debt.

How is your mental health affected by being in debt?

Being in debt can cause a lot of stress and worry and can often result in feeling embarrassed and afraid to seek help. In some cases, those with problem debt and suffering poor mental health have been known to cut back on everyday essentials such as eating and heating their home.

Those in debt are less likely to recover from poor mental health and are 4 times more likely to be suffering with depression 18 months on when compared to those that do not have any debt. Sadly, those with large amounts of debt are 3 times more likely to consider suicide and it is reported that in England, 100,000 people with problem debt attempt suicide every year.

While it is clear that debt can trigger or worsen mental health issues, poor mental health can also cause be the catalyst of the debt. Those suffering with mental issues said they notice a significant change in their spending habits during periods of poor mental health. Statistics provided by the Money and Mental health survey found that:

In addition, those suffering from anxiety found it incredibly difficult when it came to dealing with managing utility bills and 75% of people surveyed avoided face-to-face, phone and postal communication altogether.

The statistics clearly show a correlation between mental health and finance and that more should be done to help those that are suffering.

How to manage your finances to help reduce mental stress

It is almost impossible to avoid having debt altogether, a mortgage is a debt and after all most people aren't lucky enough to pay for their new car outright. It is important however to stay on top of your finances to avoid them spiralling out of control. It can be difficult to maintain control of your finances, particularly if you are suffering with mental health issues but there are charities, websites and apps that can help you to manage your money.  For example, app-only banks such as Monzo and Starling Bank have a function that can block problem spending such as gambling transactions.

With Monzo, once the block is activated, the only way to remove the block is to speak to a customer service agent. Even then, you'll have to wait an additional 48 hours before you can turn it off yourself.

It is a feature that could have a huge impact in the finance world. I'd like to see it implemented even further, maybe for impulse spending or larger transactions that do not match the normal spending activity. Monzo has even talked about introducing a feature where a trusted friend or family member can authorise certain transactions on an account. Our article, 'How to safeguard your finances from scams and problem spending' provides further insight into apps and websites available to help family members with their finances.

Small steps towards managing your finances can make a big difference. There are lots of smartphone apps that offer in-app budgeting features that help you keep track of your spending. Our article 'The best budgeting apps in the UK' not only outlines app-only banks but also apps that help you to budget without having to open a bank account. However, the best way to help regain control of your finances is tackling the problem head-on. Our articles 'The simple tricks to repay debt quicker' and '5 steps to clear credit card debt' provide some practical help and tips to help pay off debt.

What to do if you're in financial difficulty

It isn't bad to have debt, and in the current climate, it is almost impossible to not have any debt at all. However, there are two different types of debt, good debt, seen as a sensible investment for your future e.g a student loan and bad debt, seen as a debt that can get you into financial difficulty e.g a payday loan.

What is good debt?

Good debt is an investment that doesn't negatively impact your overall position financially. With good debt, it will be thoroughly researched and you have a clear reason for taking it out. There will be a clear plan in paying it back, with a view to paying the least amount of interest over the shortest possible term.

What is bad debt?

Bad debts can be impulsive purchases, large purchases that are outside of your budget, short-term borrowing or borrowing that is poorly thought out.

Being in financial difficulty is scary and can sometimes lead people to think that there is no way out. No matter how bad the debt is, there is always another option. The best course of action is to prioritise your debts in order of importance and to seek advice.

How to get free debt advice

There are lots of charities and websites that offer free debt and financial advice, we have listed some below.

Social media often has a bad name for creating negative perceptions of reality, however, it isn't all bad. We have listed some inspirational accounts to follow:

Apps to help safeguard your family and friends

If anyone in your family or a close friend is vulnerable and you worry about problem spending or if you think they are at risk of being scammed then check out our article 'How to safeguard your finances from scams and problem spending' for more information.

How is your mental health affected by being in debt?How to manage your finances to help reduce mental stressWhat to do if you're in financial difficultyWhat is good debt?What is bad debt?How to get free debt advicePlaces to get extra mental health supportSocial media accounts to follow for supportApps to help safeguard your family and friends

Can I get health insurance with depression, anxiety or mental illness?

By Andy Leeks
10 min Read 31 Mar 2022
The short answer is yes, you can get health insurance if you currently have or have previously suffered from depression,...

By Damien Fahy
1 min Read 22 Nov 2020
Episode 297 - In this week's podcast I explain the difference between good debt and bad debt and provide a...

Debt consolidation and mortgages: should I remortgage to pay off debt?

By Laura Mossman
11 min Read 31 May 2022
Most people associate remortgaging with securing a better interest rate for their monthly repayments or releasing funds for home improvements,...