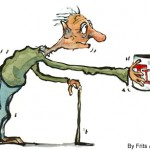 In the last few days there have been a lot of headlines about the latest HMRC error, this time affecting National Insurance contributions (NICs). With claims of £1.3bn of NICs being lost by HMRC there are concerns that millions of people could receive a reduced state pension when come to retire, despite having always paid NICs while they were working. So I’ve decided to bring you the facts about what has happened and what, if anything, you need to do about it.

So what has actually happened?

Broadly speaking you pay NICs if you are employed or self-employed and are aged between 16 and state retirement age. HMRC then accredits these contributions to each individual’s NIC record which is then used to determine their level of entitlement to certain state benefits – such as the Basic State Pension.

However, between 2004 and 2009 around 9.3 million NI payments made by employers, worth around £1.3bn, were not matched to workers’ records meaning that many people will subsequently have an incomplete NIC record.

So have HMRC lost this money?

Don’t believe everything you read in the tabloids. When HMRC couldn’t match up the NIC contributions to individual NIC records they simply put them in to a ‘holding account’ while they try and rectify the problem. So HMRC knows exactly where the money is.

How did this happen?

Some of the blame may well lie with HMRC’s administration but there are a number of other reasons why NICs were not be matched up correctly. It could have been due to a clerical error by an employer or something as simple as an employee giving an incorrect National Insurance number to their employer. Realistically these sorts of errors have existed since the NIC system began, it’s just the scale of the problem that has now come to light.

Will this result in people receiving a reduced state pension when they retire?

HMRC claim that it won’t. HMRC routinely write to people who have a gap in their NIC record. Should you receive such a letter in the future and you think that it’s incorrect then contact HMRC and they will resolve the situation.

The problem may be eased slightly for those people reaching state pension age after 6th April 2010 because the number of qualifying years of NIC contributions needed to receive a full entitlement to a basic state pension was reduced from 44years for men (39 years for women) to 30 years.

So do I need to do anything?

First of all don’t panic. If you are affected then it will inevitably come to light. But in the meantime if you want to make sure that you NI record is correct then there are a couple of things you can do:

By Damien Fahy
1 min Read 14 Feb 2021
Episode 308 - On this week's podcast we answer your questions about the Nest pension scheme, which was set up...

By Lauren Burrows
3 min Read 30 May 2019
Monzo - supposedly one of the app-only banks of the future, has apologised to its customers for issues with its...