Owning A Home > House Prices > Where next for house prices? The one statistic that says it all

Where next for house prices? The one statistic that says it all

It seems like an upturn in the economy, Government incentives such as Help to Buy and historically low interest rates are finally breathing some life into the UK housing market. However, don't get too excited as house prices are still way off the peak seen in late 2007, when the average house was worth around £182,000. Halifax's latest estimate of the average house price is just under £170,000. It is also good to see an increase in house sales but current house sales are currently half the level seen during the 2007 peak.

House prices, in real terms, have fallen considerably since 2007. Whilst there has been an actual fall in the average price of around 6.5% this does not take into account inflation, this makes the fall in real terms around 25%. As you can see from the graph below house prices dropped dramatically from late 2007 to early 2009 and then made a small recovery in 2009. However, since 2009 house prices have basically been moving sideways, a trend we have been stuck in for the over 4 years.

Where are house prices going next?

As stated, we are currently in a sideways movement on house prices as indicated by the blue line on the graph below. We are also in a sideways movement on the number of house sales as indicated by the red line on the graph below. You will also notice that there is a distinct correlation between house sales and house prices which is basically 'demand and supply' at work.

Currently the demand for houses is producing around 50,000 sales each month, which is historically low, mainly due to the lack of availability of mortgage finance. The graph shows that  whenever there is a significant rise in house sales volumes, prices will soon follow suit. So bearing this in mind house prices will continue to move sideways until we see a breakout in house sales beyond 70,000  a month. The data for the graph is supplied by the Land Registry and is based on completed sales so there is a time lag from sales being agreed to the figures appearing in the data.

If the next set of figures from the Land Registry, due for publication on 29th August, show a breakout beyond 70,000 house sales then we can safely say house prices are on the up for the longer term. 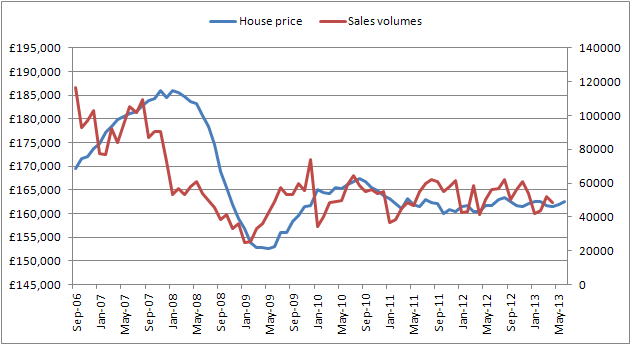 Negotiating house prices: how to get the best price

By Liam Fahy
12 min Read 07 Jan 2021
When you are looking for a new home and find one you are interested in buying then you should make...

By Bronte Carvalho
5 min Read 16 Aug 2021
UK house prices fell in August for the first time this year, according to new data from property website Rightmove....

What is going to happen to UK house prices? October 2021

By Laura Mossman
12 min Read 04 Oct 2021
If you are planning to buy or sell a house, you will be interested to know what is likely to...