Owning A Home > Mortgages > How long should you fix your mortgage rate for?

How long should you fix your mortgage rate for? 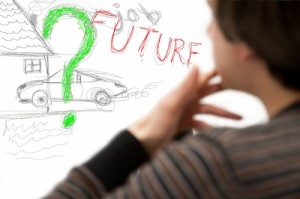 When should you fix your mortgage?

I'm often asked by clients 'Should I fix my mortgage?'  or 'How should I fix my mortgage for?' Even as a qualified mortgage adviser, the answer is that if I knew, I'd have retired many years ago! The adviser's role is not that of clairvoyant with crystal ball, more one of a mentor enhancing your strengths but compensating for any potential weaknesses.

It's important not to view the mortgage securing the roof over your head like an investment in my view and you should not try to 'play the market' when choosing your next or first mortgage product. As interest rates have been at all time low levels since 2009 it doesn't take a professional to predict interest rates will rise, so fixing your mortgage rate seems the obvious choice for most.

Nobody knows exactly when interest rates will next rise and by how much (even the policymakers in the Bank Of England) but there are a few signs to look out and things to consider:

So that's a few tips on when to fix your mortgage, but....

How long to fix your mortgage for?

Based on current market conditions this will get you a very low rate but consider what might happen afterwards. If you can easily afford a rate of 2% above this, plan the property as a stop gap or need flexibility to pay off a lump sum or similar then a two year fix might be for you, although an offset mortgage might be better for the latter group. Don't forget though that most products have a set up fee (typically £500- £1000) and you need to put this into your calculations when looking at a longer term rate as you'll likely pay more fees if you switch every two years.

Popular in the last few months as the difference between swap rates (see earlier) on two and five years has increased, but the three year fixed mortgage rates have remained close to the two year giving a little more security for a modest initial increase in monthly repayments. Some predictions are that rates could peak (in this decade) in 2017 though so maybe jumping into the fire?

Four Years, Five years and beyond

Don't take one of these to play the market, you'll be looking over your shoulder at rates for the term while you are 'paying more'. Take it for peace of mind to stop the worry, you'll likely pay less in fees than shorter term rates but be careful you don't tie in for too long if you need to move, most products are portable to another property but you'll be stuck with the same lender who might not be competitive when you need to move if you need to borrow more.

Of course the best thing to do is allow a good adviser to do all of this and much more!

The material in any email, the Money to the Masses website, associated pages / channels / accounts and any other correspondence are for general information only and do not constitute investment, tax, legal or other form of advice. You should not rely on this information to make (or refrain from making) any decisions. Always obtain independent, professional advice for your own particular situation. See full Terms & Conditions and Privacy Policy.

Which are the best long-term fixed rate mortgages - and should you get one?

By Laura Mossman
22 min Read 06 May 2022
When considering whether to take out a long-term fixed-rate mortgage deal, borrowers need to balance the benefit of having certainty...

By Laura Mossman
12 min Read 06 May 2022
Fixed-rate mortgages are by far the most popular mortgage products in the UK, with borrowers choosing them for the stability...

By Laura Mossman
4 min Read 22 Jul 2021
The so-called "mortgage price wars" are heating up as Nationwide launches the UK’s lowest ever 5-year fixed-rate mortgage, with an...