What is no-contract broadband? 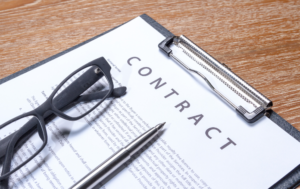 Most broadband packages come with a minimum term contract of between 12 and 24 months, but some providers offer shorter 'no-contract' broadband deals. These usually start at 30 days with no requirement to renew after that period ends. It may seem like an attractive option if you only plan to live somewhere for a short period, but the flexibility usually comes at a cost. In this article we will explain how no-contract broadband works so you can decide if it is a good-value option for your household.

How does no-contract broadband work?

Broadband deals that are listed as ‘no contract’ are probably more accurately described as short term or rolling broadband deals. You sign up for an initial period, usually 30 days, that rolls over if you do not cancel. It works like a Netflix or Spotify subscription – if you cancel, you keep the service up until the end of your billing period or until the end of a 30-day notice period. At that point your service will end without you needing to pay any cancellation fees.

Broadband packages with 12, 18 or 24 month contracts usually come with a significant exit charge, so a no-contract broadband deal can give you the flexibility to cancel when you need to.

Why do you need short-term broadband?

In some cases, longer term contracts can be portable – which means you can move house without needing to cancel your contract – so check with your provider before you consider moving to a no-contract broadband deal. This can work out as a much cheaper way of getting broadband to your new home if you are moving.

Most major broadband providers do not offer rolling broadband contracts. At the time of writing here are a few that do:

Virgin offers the fastest speeds available in the UK, as well as slower speeds that will suit medium usage households. Its flexible packages include the option to add TV and landline extras. The connection is powered by Virgin Media’s own cable network, so it is only available in around 55% of UK households. You will have to pay a significant set-up fee, usually around £80, and a higher monthly charge than if you sign on for 18 months.

You can read more in our Virgin Media broadband review.

NOW offers three main packages and no ultrafast option, but the current installation fee is lower than Virgin Media’s at £65. You can access discounts on NOW’s entertainment passes as a broadband customer, as well as home phone deals.

NOW’s 12-month package comes with a cancellation fee that is more lenient than rival deals, so check to make sure the £65 installation fee would not be more than the cost of cancelling a 12-month contract that comes with a £5 fee.

You can find out more about other packages in our NOW Broadband review.

Hyperoptic offers broadband deals with superfast and ultrafast download speeds, plus the option of a home phone package as an add on. Installation and set-up fees are usually around £30.

You can learn more about different types of broadband by reading our article ‘Which broadband is best?’.

Direct Save Telecom does offer a rolling contract option, but only on its standard broadband (ADSL) package and basic fibre package. These two deals offer average download speeds of 11Mbps and 35Mbps respectively. If you are unsure how fast your broadband needs to be, read our article ‘What broadband speed do I need?’.

Direct Save charges a relatively low set-up fee of £24.95.

Cuckoo offers three types of one-month broadband deal. An 80Mbps option for homes with standard fibre and two full fibre options, one with download speeds of 115Mbps and another with 900Mbps. All three options charge a one-off set-up fee of £60.

What are the pros and cons of no-contract broadband?

There are alternatives to no-contract broadband if you find that the negatives outweigh the advantages of a short-term deal.

Use your mobile phone

You could choose to use your mobile phone as a mobile hotspot, essentially turning it into a mini Wi-Fi router for your home. This could be a good use of an unlimited data package, though it would drain your battery and quickly use up your data allowance if you have one. Mobile hotspots work well for occasional use if your home broadband is down, but you may find the download speed limited and streaming content difficult, especially if you connect multiple devices at once.

If you are a student, you could choose a broadband package with a nine-month contract to line up with the amount of time you are at university or college. This means you can avoid paying for broadband you are not using during the summer holidays. Many providers offer special student deals at discounted rates, so check to see what options are available in your area.

If you only need to connect to the internet occasionally, you could try using public Wi-Fi. This is not a long term solution, but if you need to work from home for a couple of days, finding a comfy seat in your local library or cafe may be a better option than a month of no-contract broadband.

Some mobile broadband packages are available on one-month deals. You can sign up to receive a portable, battery-powered wireless MiFi device that uses 3G, 4G or 5G mobile phone networks to create a hotspot. This is another short term solution as the speed you get is unlikely to be fast enough for anything other than browsing, checking emails or occasionally streaming videos.

Should you get no-contract broadband?

Ultimately, you'll need to consider whether a short-term contract such as a 12-month deal ends up working out cheaper than a rolling contract. For example, if you need broadband for eight months, it could be cheaper to cancel a 12-month package after eight months and pay the cancellation fee, than pay the higher set-up fee for a no-contract broadband deal.

What is Personal Contract Purchase (PCP) - and is it the best car finance option for you?

Is Personal Contract Hire (PCH) the best car finance choice for you?

By Lauren Burrows
4 min Read 20 Oct 2022
With the cost of living crisis affecting households and businesses across the UK, Vodafone has launched a discounted social broadband...