Saving For Your Future > Investing > Should you buy the new Neil Woodford fund?

Should you buy the new Neil Woodford fund? 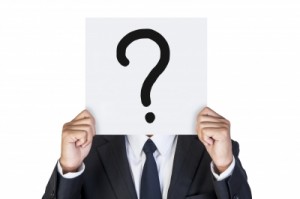 The investment fund industry has been doing backflips over news that Neil Woodford is to launch a new investment trust in April. The former Invesco Perpetual fund manager left the company to launch his own fund the CF Equity Income fund. Woodford Investment Management has announced that in April 2015 it will launch a new Neil Woodford fund that will focus on early-stage and early-growth companies. It will also target a 10% return a year.

Neil Woodford is placed up on a pedestal by lots of investors and financial journalists as possibly the greatest fund manager to walk this earth. He used to manage the Income fund and High Income fund at Invesco Perpetual before he left to set up his own fund management firm last year.

In fact, if you believe the PR circus that surrounds Neil Woodford you might start to think he can actually walk on water. But getting away form the hysteria, I analysed Neil Woodford's long term performance over the last 15 years across his various funds. There is no denying that his track record is exceptional. The chart below shows how Neil Woodford (the blue line) has performed versus his fund manager peers (the red line). The chart shows how much each would have returned if you had given them £10,000 of your own money. Perhaps it is not surprising then that during Woodford's time at Invesco Perpetual the funds he managed attracted over £30 billion of investors' money. Trust me, that is a hell of a lot by any standards! 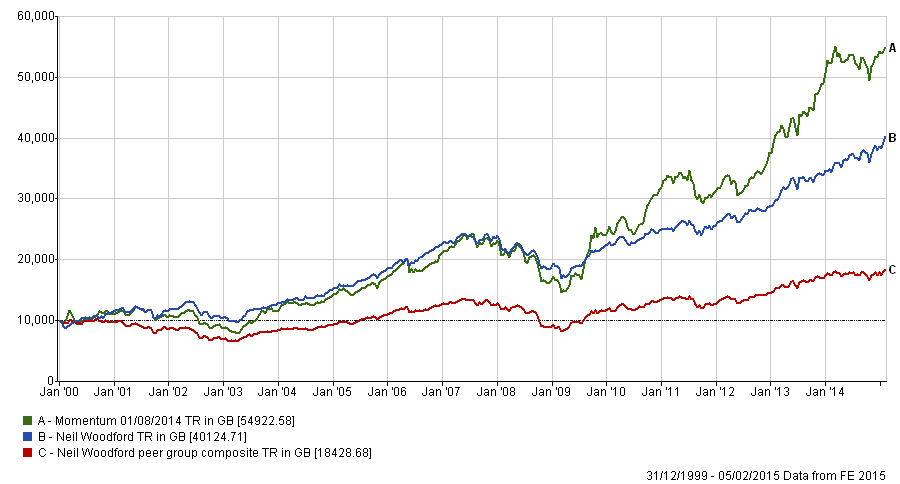 You would have done better yourself

But you may have noticed the green line in the chart and thought 'what is that?' That line is what a DIY investor would have achieved if they had simply bought the top UK equity funds and switched them to the best performing alternatives every 3 months. That's right, you would have made much more money!

If you'd had £10,000 fifteen years ago and given it to Neil Woodford's peers they would have turned it into £18,429 while Woodford would have returned £40,125 to you. However, you would have turned £10,000 into £54,923 yourself with only a few minutes effort every 3 months by investing in those funds with momentum! That's why 80-20 Investor has taken the key principles of momentum theory, volatility and risk analysis to produce a unique algorithm for identifying the best funds to buy from the tens of thousands available to DIY investors.

(Note: I've created a FREE short series of emails that show you the full techniques and tools that achieved the above and also would have turned £100,000 into £1.1 million. It's FREE for a limited time only. Each of the concise emails will take you just 2 minutes to read and will tell you the simple techniques and tools the City fund managers use - which you can now use too.)

The reason the momentum strategy outperformed by so much is that every fund manager has his/her day. So you can see in the early 2000's the momentum portfolio closely tracked Neil Woodford's performance. That's because his funds and investment style had momentum, meaning that your momentum portfolio would have been invested in his funds at that time. But then markets changed. Remember that no fund manager outperforms all of the time. If you analyse Woodford's performance he tends to outperform in falling markets. Yet in rising markets it's 50:50 whether he outperforms or underperforms. That explains why Neil Woodford has performed on par with the average of his peer group over the last 6 years (see below). But yet again, you could have done better yourself. 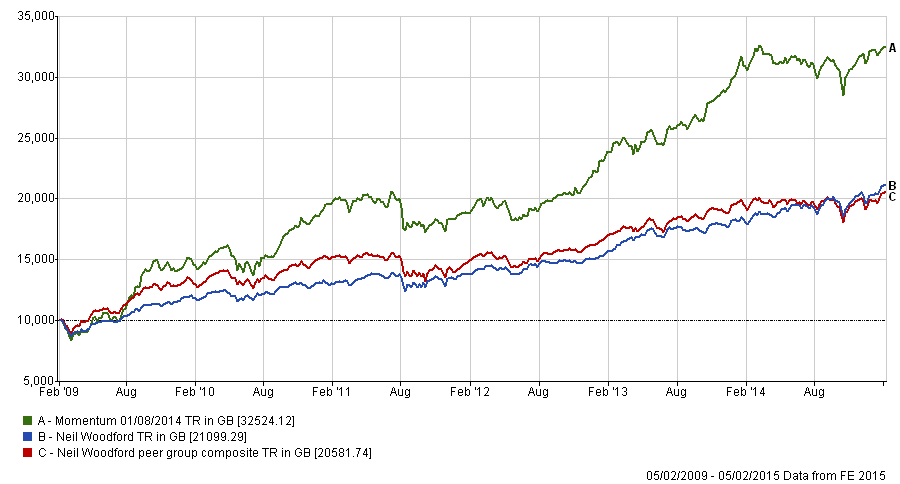 One other point is worth highlighting. If we look at just the main UK equity fund sector, back in 2000 there were only 117 funds within it, today there's now more than double that number. That makes it harder for any fund manager to top the performance tables.

So what does all this mean?

There's no denying that Neil Woodford's track record is impressive. In fact, if I had to pick just one fund manager to look after my money he'd be near the top of my list. The fact is I don't have to pick just one manager and I certainly don't have to stick with them once I've made my choice - neither do you! As I highlight in the DIY investing e-course above, fund managers do not deserve your loyalty. If you take anything from this week's newsletter it's the following lessons:

What I'm more excited about with the Neil Woodford fund launch

What I find more exciting about the new Woodford announcement is not that he is running the fund but that the new investment trust will invest in innovative early stage companies including biotechnology and alternative finance firms. Plus there's talk of Woodford taking a performance fee which is paid in shares of the trust itself, rather than cash, so aligning his own interests with those of his investors. We need more such innovative thinking in the investment world and for that I do applaud Mr Woodford.

By Lauren Burrows
10 min Read 09 Jun 2019
Neil Woodford is a fund manager in the UK who has enjoyed a 'rock star' reputation in the investing world...

Neil Woodfood's investment empire collapses - What does it mean for investors?

By Damien Fahy
1 min read 09 Jun 2019
Episode 225 - On this week's show we talk about Neil Woodford and the suspension of the Woodford Equity Income fund. We...