Top-5 ways to clear your overdraft for good 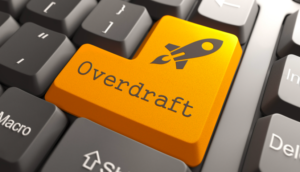 For people who habitually go into their overdraft each month or have become significantly overdrawn, it can be difficult to see how to clear the debt and stay out of the red in the future. Since the rules for overdrafts changed in April 2020, the era of cheap or free overdrafts has largely become a thing of the past, making repaying the debt all the more problematic. Indeed, most banks now have an interest rate of around 40% APR, making it one of the most expensive ways to borrow money.

In this article we look at the top-5 ways of tackling your overdraft debt, as well as giving tips on how to avoid falling back into the overdraft trap in the future by taking control of your finances.

1. Use savings to pay your overdraft off

If you have money in savings but also have expensive borrowing such as an overdraft, it can often make sense to channel that money into paying off some or all of that debt. With savings rate still low, you would save much more in interest payments by paying off an overdraft at 40% APR than you would earn from an easy-access savings account paying under 1% AER. By choosing to not clear your debt with your savings you are effectively paying to have a savings account, due to the amount of interest you are being charged on your debt versus the amount of interest you are earning on your savings.

A general rule of thumb is to pay off your most expensive debts first and usually this will mean your overdraft, unless you have a payday loan or credit card with a particularly high APR. While you then won't have as much of a financial safety net to cover unexpected costs, you may be able to use your overdraft facility if an emergency were to crop up and you needed to borrow money fast in the future. Alternatively, you may find a personal loan or credit card at a cheaper rate in the event of, for example, your boiler breaking or your car needing urgent repairs. Better still is to build up your savings pot again after you've paid off your overdraft, which will ultimately put you in a much stronger financial position overall. Read our article "Building an Emergency Fund – the what, why & how".

2. Transfer your overdraft debt to a money-transfer credit card

While many people have the preconception that going into an overdraft isn't "proper" borrowing and taking out a credit card is a more serious financial commitment, a credit card can actually often work out to be a cheaper form of borrowing. In addition, if it is used responsibly, a credit card can have a positive impact on your credit rating, whereas constantly sitting in your overdraft can have a detrimental effect.

One way of getting on top of your overdraft debt is to utilise an 0% interest offer on a credit card. While balance transfer cards  can be used to pay off other credit or store cards, you generally can't use them to pay overdraft debt. Instead, by using a money-transfer credit card with a competitive 0% interest period, you can transfer funds to your bank account and repay your overdraft. You will then want to pay off the balance on the card in full by the end of the introductory period in order to avoid paying any interest. Bear in mind that you will be charged an up-front transfer fee for transferring funds from the money-transfer credit card into your bank account, typically between 2-4% of the amount transferred.

3. Switch to a cheaper overdraft

While they are increasingly rare, there are still some interest-free overdrafts available. The most generous of these is available with the Nationwide FlexDirect account, although the amount you will be offered will be subject to status and the interest-free period is only 12 months. There is a list of bank accounts that offer 0% interest overdrafts for an unlimited period in our article "Can I get an interest-free loan?", although they all offer a relatively low overdraft limit.

If you can't get an interest-free overdraft, another option is to look for a lower-cost one. This is where app-only banks such as Starling and Monzo are currently leading the field, offering rates from 15% and 19%, respectively. However, this is subject to status and could be as high as 35% (Starling) or 39% (Monzo).

4. Take out a personal loan to pay off your overdraft

If you have a substantial overdraft, you may consider taking out a loan to pay it off as it will typically have a much lower interest rate and will almost certainly save you money. It is important, however, to make sure you can afford to meet the monthly repayments for the term of the loan as late or missed payments will feature on your credit file and could affect you being able to borrow money in the future.

Using a loan to write off an overdraft should be viewed as a one-time solution and, ideally, you should then remove the overdraft facility from your bank account to avoid getting into the same situation again. Falling into a trap of taking out loans to pay off overdrafts and then building up overdraft debt again would have a catastrophic effect on your finances.

5. Reduce your overdraft over time

Although you may want to pay off your overdraft in one go, accepting it may take some time to clear the debt and putting together a plan for how to achieve is a positive step. Indeed, the steps you take to tackle your overdraft can form the basis of good habits that will stop you getting into unnecessary debt in the future. These include:

By managing your day-to-day spending more efficiently, you may be able to free up some cash to start chipping away at your overdraft. By making your overdraft repayments a priority and cutting back on non-essential spending, you can pay it back even faster, saving you money over the long term.

For advice on budgeting, read our article "The best budgeting apps in the UK".

It's good practice to use any extra money you receive to pay down any debt, including your overdraft. This includes commission or bonuses from work, gifts or inheritance.

By moving direct debits and standing orders for bills to just after you get paid means you have a better understanding of how much money you have left for the remainder of the month, meaning you are less likely to slip further into your overdraft. Similarly, opting to pay off a chunk of your overdraft just after payday also helps instil the habit of paying off debt as a priority.

As you pay off your overdraft, you can ask your bank to reduce your limit to help you avoid the temptation of using it again in the future. This means that once the full amount is paid off, you can opt to have no overdraft facility or a minimal limit.

If you feel your overdraft debt is overwhelming and you are finding it difficult to keep on top of it, the first thing you should do is speak to your bank. It may be able to restructure your debt to make it easier to manage, reduce your interest rate or give you a short period of respite from having to pay the interest.

There are also a number of organisations set up to help people struggling with debt, including Citizens Advice and StepChange. For further sources of help, see our article "Where to get free debt advice", or you may find our article on debt and mental health helpful.

How to clear your overdraft - Millennial Money

By Lauren Burrows
2 min Read 15 Feb 2022
In this episode of Millennial Money, I list 4 different methods you can use to clear your overdraft, including budgeting...

Can I use a 0% credit card to clear loan debt - and is it a good idea?

By Laura Mossman
5 min Read 31 May 2022
If you have a personal loan and are struggling to keep up with the repayments or want a way of...

By Lauren Burrows
2 min Read 04 Oct 2022
In this week's millennial money episode, Damien Fahy and I speak about the top ways to pay off credit card...