News > Klarna launches interest-free credit card in the UK: How does it work?

Klarna launches interest-free credit card in the UK: How does it work? 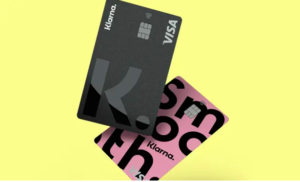 Klarna has announced the launch of an interest-free Buy-Now-Pay-Later card for customers in the UK, following the success of its rollout in Sweden and Germany. The Klarna Card will allow users to spread the cost of purchases across a 30-day period in line with the firm’s existing “Pay in 30” product. In this article, we take a look at how the Klarna Card works, where you can use it and if it’s really safe.

How does Klarna Card work?

Klarna Card is a Visa payment card that Klarna customers can use to make interest-free purchases and pay for them in instalments rather than in a single upfront fee. Customers can sign up for free. Initially, Klarna Card users will have up to 30 days to pay for their purchase in full, using the Pay in 30 feature already available in the UK. However, the company intends to add more payment methods in the future.

Klarna Card, which comes in 2 designs - black and pink - connects to a UK bank account and can be linked to Apple Pay and Google Pay too. Users can manage their card from their mobile Klarna app and set up push notifications to notify them every time a purchase is made or when a payment is due. Payments can also be extended by a further 10 days for free.

How much can you spend on a Klarna Card?

There is no predetermined credit limit on a Klarna Card, but Klarna customers can estimate how much they are able to spend on their card by viewing their “Purchase Power”, which differs from individual to individual. Klarna sets customers’ “Purchase Power” using information such as credit history, repayment history with Klarna to date, and any overdue payments. To maximise their ‘Purchase Power”, customers are encouraged to ensure they make all repayments on time - with Klarna and elsewhere - in order to build a credit-worthy profile for themselves.

Where can you use a Klarna Card?

Klarna Cards can be used anywhere that Visa is accepted. This means that customers can use their Klarna Card even at retailers which have not partnered with the company. However, Klarna Cards cannot be used to withdraw cash from an ATM.

Who can get a Klarna Card?

In order to be eligible for a Klarna Card, you must meet the following criteria:

Klarna performs a soft credit check on individuals who have applied for a Klarna Card. This will not affect your credit score.

What happens if you cannot keep up with your repayments?

Customers who consistently fail to make repayments will have their Klarna Card cut off and debt collection agencies may be used to recover outstanding funds.

Klarna itself is safe in that it does not damage customers’ credit reports and stores details safely on its server with no history of interference of hacks. Klarna Cards can also be instantly blocked by using the Klarna App to prevent fraud in the event that they are lost or stolen. However, it is important to note the areas in which Klarna Cards are not entirely safe to use, and customers should be aware that they forego certain consumer rights.

Klarna’s Pay In 30 product is not regulated by the Financial Conduct Authority, and any payments made using Klarna Cards are also not covered by Section 75 of the Consumer Credit Act, meaning that customers are not protected by UK law if they purchase an item worth over £100 which is faulty, not as described, not delivered, or if the retailer goes bust. Although Klarna has its own Buyers’ Protection Policy, this is not ingrained in UK law, and the company reserves the right to change or remove it at any time.

In addition, Klarna Card is not a suitable payment option for those predisposed or struggling with debt, as it encourages the deferment of payments which would otherwise be paid for upfront. A number of debt charities have been critical of the Buy-Now-Pay-Later industry in general, and have raised the alarm that people are increasingly slipping into debt as a result of a number of small, impulse purchases.

For more information on Klarna and its security credentials, check out our full review. More details on the Buy-Now-Pay-Later industry and its pros and cons can be found in our article “Everything you need to know about Buy Now, Pay Later”.

How to get help for debt

If you are struggling with debt and would like advice, we have a number of articles which can help you. Just click on the links below:

Which credit card has the longest interest-free period?

By Laura Mossman
11 min Read 03 May 2022
Used correctly, a credit card can be a handy tool to help manage your finances, but with so many different...

By Andy Leeks
11 min Read 18 Jan 2022
American Express is no stranger to rewards-based credit cards, having established successful relationships with the likes of British Airways and...

What is a balance transfer credit card and how does it work?

By Liam Fahy
10 min Read 14 Jul 2020
Borrowing with a credit card is expensive and if you have built up a balance on a credit card that...