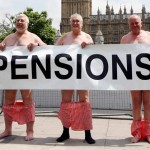 The Government's new Pension Bill was due to receive its second reading in the House of Commons tomorrow, however, this has now been postponed until an unspecified date in the future. But regardless of this, protests will still take place (see below) because if the bill is eventually passed it will mean some 330,000 women will have to wait for an extra 18 months or even longer to receive their state pension. So what is all the fuss about?

What changes will the Pension Bill make?

It proposes to speed up the timetable for bringing the state pension age into line at 65 in November 2018 - two years earlier than planned, there will then be a rise to 66 for both men and women between 2018 and 2020 six years earlier then planned.

Who will these changes affect?

At present a woman born in March 1950 starts receiving her state pension at 60. After the changes, a women just over 4 years younger will have to wait until the age of 66 before claiming. Opponents of the bill say that there is not enough time for them to make up any difference from personal savings.

What can I do if I'm affected?

Age UK is holding a mass lobby of MPs at Westminster on Wednesday and is encouraging people, via their website, to join this lobby.

Are all MPs in favour of the changes?

No, some 140 MPs across all parties have signed up to an early day motion put down by Labour MP Teresa Pearce, which calls on the Government to revise the timetable.

Can I reduce my income and tax bill by paying into a pension?

By Damien Fahy
6 min Read 23 Jan 2020
This article was inspired by a question posed and answered in the Money to the Masses facebook community group. Join...